In recent years, the use of chemical crop protection products has been under pressure in Europe. Residue requirements are becoming stricter and more and more attention is being paid to the environment and the public health of growers and consumers. Although more and more organic crop protection products have come on the market in recent years, the agricultural sector makes only limited use of these products. Despite their good functioning in the lab, their efficacy in the field is often disappointing. Research is still in its infancy and the knowledge about organic disease control is not yet as extensive among growers either. 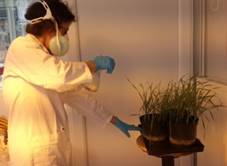 Figure 1: application of biological products on wheat during a trial

BioProtect optimises the use of biofungicides
In the Interreg project ‘BioProtect’, Flemish, Walloon and Northern French partners are investigating whether it is possible to improve the working of biological crop protection products in the field. Environmental conditions, spraying and/or application technique, formulation, application time … These are all factors that can have an effect on the functioning of biological agents and these factors are all investigated in this project. On the other hand, through demonstrations we show farmers and horticulturists the efficicacy of biological crop protection agents and teach them how to apply them optimally.

Over the past four years, existing and new agents have been tested against the most common fungal diseases in several crops. A few biofungicides have been approved in most crops, and sometimes a nice control result could be achieved with this limited supply. In other crops there were hardly any or even no biofungicides available and we had to turn to agents approved in other crops or test agents in order to achieve a good control.

Good powdery mildew control in tomatoes, strawberries and carrots
In Flanders, the effect of eight biofungicides was compared against powdery mildew in tomato (Figure 2). From the very first assessment, clear differences in effectiveness between the treatments could be seen. Karma, Kumulus and Limocide achieved good results. Karma was the most effective. Kumulus gave a visible residue on the leaves and fruits.

Tests show that it is difficult to protect strawberries against white disease without any chemical products. However, with a reduced schedule supplemented with biological agents, it succeeds with moderate disease pressure. It is therefore important to understand the working method of (new) biological agents so that their use can be optimised and schedules can be further reduced without sacrificing protection. For strawberries, Botrytis and Phytophthora are also considered in addition to powdery mildew.

In several trials in carrots with biofungicides, Hermovit was able to control powdery mildew very well. In addition, it became clear that the addition of an additive or a wetting agent can improve the effect of biofungicides (such as Serenade ASO) by up to 40% and integrated spraying schemes (alternating applications of chemical and biological products). We also saw that there is a need for more approved biofungicides in this crop. 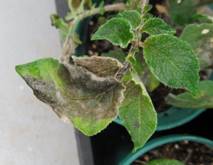 Also tests in arable farming like potato and apple
The Walloon and French partners in this project have not been idle for the past three years either and have carried out lab and field trials in some other crops. In lab tests on wheat, excellent results were obtained with Serenade ASO and with some tests against yellow rust (Zymoseptoria tritici). In a potato potting trial, certain test agents reduced the potato blight (Phytophthora infestans) (Figure 3) by 40 to 90% compared to the untreated, if the biological agent was applied preventively. In an apple seedling trial, several test agents had a similar effect against scab (Venturia inaequalis) as the biological reference copper.

Promising results on a small scale in lettuce

Besides field trials, small-scale trials were also carried out in lettuce. This allowed us to quickly screen several potential products for their activity against certain common pathogens (Botrytis cinerea, Rhizoctonia solani and Fusarium oxysporum pv. lactucae). Among the commercial products, we observed several positive effects against the diseases, but still weaker than the chemical reference products. Some of the test compounds developed within this project, such as the Lipopeptides and Rhamnolipides, provided very strong suppression of Botrytis, comparable to the chemical reference. There is thus great potential for biological control of plant diseases in lettuce. Further research can help explore this potential. 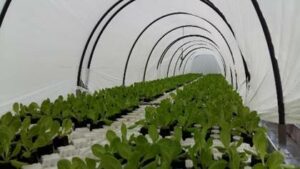 Common growers are open to the use of biological agents
The project also carried out a comparative study of agricultural practices in the border region of France-Wallonia-Flanders. With a questionnaire we polled growers in this region on their experience with organic plant protection products. In this way, we tried to gain a better insight into the use of and the need for organic crop protection products.
The first results of this study show that 83% of the surveyed growers have already used an organic crop protection product, 35.7% even do so often. When asked which products they were already using, the growers indicated that they were using both bio-insecticides (such as Tracer, Eradicoat, Spruzit/Raptol and Xentari) and biofungicides (such as Vacciplant, Karma, Limocide, Contans, Serenade, sulphur, Trianum, Prestop, etc.). 40% of growers were satisfied with the efficacy of these biological products.
Factors discouraging growers from using biological agents are that they are too expensive, not effective enough, and there is not enough information available about their efficacy. The same factors were also identified as stumbling blocks for growers who do not yet have sufficient information.

The survey clearly showed that there is still a lack of information to convince growers to use more biological crop protection. Within BioProtect we want to tackle this by composing Technical Product Sheets. In addition to general information on the content and functioning of these products, these datasheets also elaborate on the correct application method so growers can obtain better results. Furthermore, on this website, a database in Dutch and French has been created of registered biological agents in France and Belgium. By using various filters, a grower can easily find which products can be used against a certain plant disease.