We would like to invite you to already save the date of 10 DECEMBER 2020 for the SMARTBIOCONTROL and BIOPROTECT symposium.

The SMARTBIOCONTROL symposium will take place in the morning, the BIOPROTECT symposium in the afternoon. Both symposiums will take place on 3 sites (Flanders: PCG, Kruishoutem; Wallonia: Gembloux Agro-Bio Tech and France: ULille or ISA-YNCREA), with a livestreaming and simultaneous translation towards the other sites.

An official invitation, and more details about this day will be communicated to you soon.

Smartbiocontrol particpates in the category ” Industrial transition for a Smart Europe”.

Do not hesitate to support us by voting for our project!

Search for the project Smartbiocontrol

On  the 5th of February, the Smartbiocontrol symposium was held at Materia Nova in Mons.
An overview was given of the survey of Bioprotect by Alexis Jorion (CRAW), and that of Bioprod by Eric Comont and Maxime Tarascou (Yncrea). The bibliography study of Bioprotect was also reviewed (Maryline Calonne (UCL)). In the afternoon, the Interaction with other Interreg projects was discussed.

The newsletter of BIOPROD is now available online on following adress:

On July 29, 2019, the partners of Biocomgest were present at the fair of Libramont (Philippe Jacques and Jenny Neukermans). 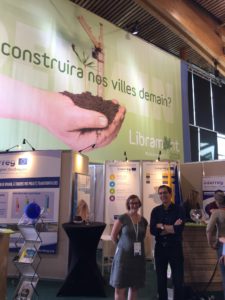 On the 4th of june 2019, the symposium Smartbiocontrol was held at the PCG in Kruishoutem.

During this day, the scientific results of this semester were presented by the responsibles of the project.

In the afternoon, there was a visit of the PCG.

Some pictures of the day: 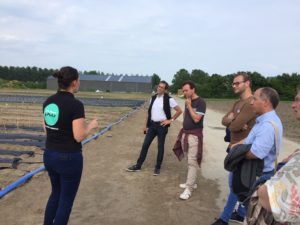 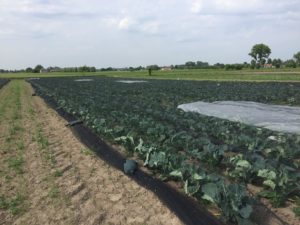 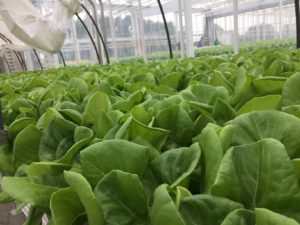 You can read the newsletter of the BIOPROD project using following link: 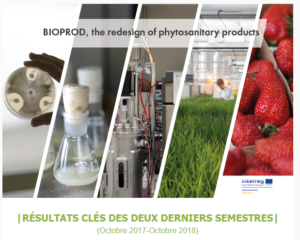 On the 6th of february 2019, the Smartbiocontrol symposium was held at Reims.

The scientif results of this semester were presented.

Here you can find some pictures: 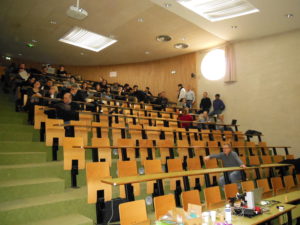 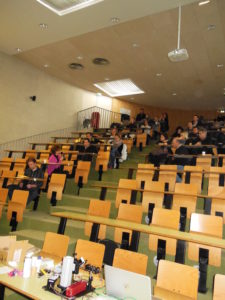 At the time of the Ecophyto plan, the politico-media hype about the renewal of the license for glyphosate and societal debates leading to a slow awareness of the population, a group of men and women wants to change this. These aesthetes, led by a visionary Professor Philippe JACQUES, advance with a fixed idea, the lipopeptide!

Indeed, scientific research is conducted in our laboratories in North of France, Wallonia and Flanders to show that these lipopeptides produced by bacteria of the genera Bacillus spp or Pseudomonas, as well as these bacteria themselves are ideal candidates as bio-pesticides with antifungal action.

In a few months, spring will return and we hope that this period will confirm our scientific certainty that we can take full advantage of the green (r)evolution that wins over our campaigns to guarantee a bright future for future generations.

At present, large quantities of chemical plant protection products are used in agriculture. These synthetic products allow sufficient production and at a lower cost to satisfy both the market and the consumer. The health risks inherent in some of these products are poorly evaluated and inappropriate use can lead to both environmental and human health risks. Aware of this problem, the European Union has taken certain measures and is committed to harmonizing the conditions and procedures for authorization of plant protection products in order to protect the environment and human health. Similarly, a European directive mandate obliges an integrated crop protection since 2014.

As part of the INTERREG BIOPROD project, part of the SMARTBIOCONTROL project portfolio, the multidisciplinary actions carried out in collaboration with all partners aim to produce molecules of interest (lipopeptides) and beneficial microorganisms for use in the field.

These actions are detailed below:

The BIOPROD project is composed of many workpackages ranging from the production to the technical validation and economic validation of the mounted pilot scale. Let us guide you through this comprehensive overview of the entire project.

The production of lipopeptides is based on fermentation in a liquid medium. The culture parameters must stimulate a important production of the molecules of interest by the bacteria. These parameters are of a physical nature (temperature, stirring and aeration rate) or of a chemical nature (O2, pH, substrate).

One of the factors limiting the production of lipopeptides is typically the availability of dissolved oxygen in the culture medium, which is necessary for the aerobic metabolism of the bacteria. The University of Lille and Lipofabrik are currently conducting feasibility and modeling studies on the production of lipopeptides in bioreactors. The first results are conclusive and will be revealed to you shortly during a scientific communication, which you will be able to find on our website of the portfolio SmartBioControl.

The second factor limiting production is the culture medium. It must bring in a sufficient amount of elements. The two most important are carbon and nitrogen. For the sake of valorization of industrial co-products it is possible to use it as a fermentation medium. In liquid fermentation one of the best known is the molasses from the sugar industry. Lipofabrik explores the co-products of corn, wheat, peas and potatoes. Lille 1 continues with trials on the optimization of the composition of the culture medium. The experiments concern different carbon sources (glucose, glycerol, …) and also sources of nitrogen (glutamic acid, arginine, …).

The Bioprod project faces many challenges and that of the formulation is an integral part of it. The efficacy in the field of the lipopeptides is based on the addition of adjuvants or even encapsulation.

The composition; active molecule (from Bioscreen) plus adjuvants is tested as inducer of plant defenses on wheat, lettuce, tomato and potato. The first observations focus on the physico-chemical properties, wetting and conservation of the biological activity of the active molecule. The wetting is essential in the case of spraying during field treatment.

Mycosubtilin and surfactin are certainly natural molecules, but nonetheless remain potentially toxic for humans and their environment at high concentrations. The use of lipopeptides results in the application for a marketing authorization. Materia Nova and the University Lille 1 are therefore conducting a thorough study of the biodegradability, cytotoxicity and ecotoxicity of the two molecules. A first test of biodegradation of surfactin has begun over a period of sixty days. We will communicate you the results in the next BIOPROD newsletter, which will be published around May 2018.

The University Lille 1 has established the cellular models used for the study of cytotoxicity.

Technical and economic validation of pilot scaling up

Ecology is a top priority, a non-competitive cost relegates it to the rank of exploitation!

Smartbiocontrol aims at the industrial production of lipopeptides for use as a fungicide on large cultures. The economic reality is not to be concealed in such a global and ambitious project. It is vital to arrive at a low cost of production so that the cost of acquisition is acceptable for the end users.

To do this, the ISA in partnership with the Bioprotect project is analyzing the market for fungicides used throughout the Interreg area. However, this market is very strategic, as evidenced by the difficulty in obtaining an accurate estimate of the volumes of fungicide used throughout the Interreg zone. A survey will target two parts of our target audience, distributors and end-users to determine their vision and responsiveness to biopesticides. The content of the survey finalized, the ISA is currently in a phase of making appointments with the interlocutors representing the target audience.

Any process with an industrial aim must go through a pilot scaling up. This projection is a key step and its complete control will lead to a production of lipopeptides at a competitive cost. Lipofabrik is conducting a preliminary study in a 300L bioreactor and preliminary results indicate that the growth of the strain is almost similar to that of a 3L scale. Encouraging results given the economic expectations linked to the scaling up of lipopeptide production.

An external eye on Bioprod

For our first testimony in an external eye, Meet Elodie of SARL Spenninck, producer and wholesaler of organic fruit and vegetables on the market of Gros de Lille (MIN de Lomme) for ten years. Elodie is particularly sensitized to bio-phytosanitary products through her training in plant biotechnology.

It is very good! It is important to develop the bio phytosanitary market with products having a broad spectrum of action. We must go as far as possible in the search for these natural products.

SARL Spenninck has been commercialising organic for 10 years, we became a producer in two stages, the first in 2010 and the second in 2015. In this second phase, we were authorized to transform a permanent meadow into a Bio-culture. Precising that the cultivation of a permanent meadow is only allowed within the framework of Bio and this concludes our desire to preserve our environment.

Organic farming does not allow us to use the usual phytosanitary treatments. So I have to use a weeder to fight against weeds, a net to prevent the attack of insects, a fence against rabbits and plant a hedge to provide a shelter for auxiliary insects like ladybug for the biological control. It must be understood that Bio does not allow preventive treatments but only curative treatments or rather the curative treatment, because my only remedy is the Bordeaux mixture. The most important factor is the weather that will strongly influence the attack of pathogens.

This new product with antifungal action offers interesting perspectives and this will also depend on its use in preventive or curative treatment. This alternative to the Bordeaux mixture is interesting with regard to the accumulation of copper in soils. I am also thinking of protecting the health of users.

I imagine more this product as a last resort, curative, to “save the day” on a culture. I dare to imagine a product quite effective and with a fast action. As for the cost the question is complicated. Producers shall be willing to put a little more for a product but we must stay within reasonable limits especially since organic fruits and vegetables are generally a little more expensive than conventional, even if it is not always the case!

The ESBES wants to create a network of young researchers. The deadline for submission of abstracts is February 16, 2018.

The Libramont agricultural, forestry and agri-food fair is a huge open-air exhibition that welcomes more than 220,000 visitors, along with 800 exhibitors and 5,000 brands, on a site covering 300,000 m² every year.

It is an outstanding showcase for the rural world, which it presents from many different angles: machinery, livestock breeding, forestry, the agri-food industry, horticulture, research, education and culture.

Libramont is held on the last weekend of July every year.
http://www.foiredelibramont.be/libramont-fair/ 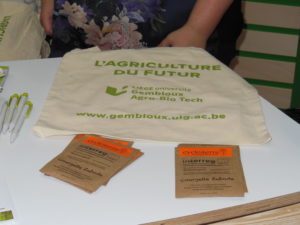 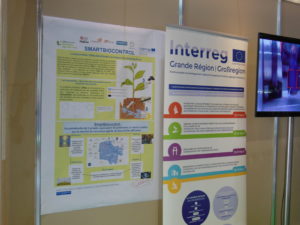